skip to main | skip to sidebar

Three antiphons from the breviary that have always spoken to me:

Ant 1: Surrender to God, and He will do everything for you.

Ant 2: Turn away from evil, learn to do God's will; The Lord will strengthen you if you obey Him.

Ant 3: Wait for The Lord to lead, then follow in His way. 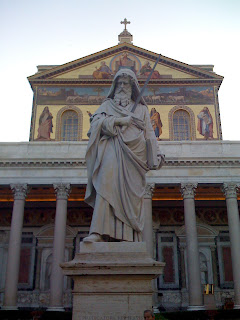 The Cross and Mercy

This past Sunday I quoted from the two homilies that Pope Francis has given since the beginning of his pontificate.  There were two main themes that I think speak of the future of his time in the Chair of St. Peter:  The Cross and Mercy.  Here are some pertinent quotes:

From the homily during the mass closing the conclave. After setting up the three 'themes' of the readings as "Walking", "Builiding" and "Professing"  he says:

This already is a great statement by the Pope.  We must profess "Jesus Christ as Lord to the Glory of God the Father" . . . But it is the second movement of his homily that brings to the forefront the difficulty of the Christian Way - it is hard because it is the Way of the Cross:

So the Pope's first word is the Cross.
For the full text go here: 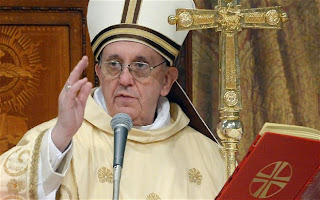 In His homily to the Vatican workers at St. Ann's parish in the Vatican the pope had a second theme:  Mercy.

In speaking about the story of the woman caught in adultery, Jesus presents what the Pope considers His most important message:  Mercy.

Non è facile affidarsi alla misericordia di Dio, perché quello è un abisso incomprensibile. Ma dobbiamo farlo! “Oh, padre, se lei conoscesse la mia vita, non mi parlerebbe così!”. “Perché?, cosa hai fatto?”. “Oh, ne ho fatte di grosse!”. “Meglio! Vai da Gesù: a Lui piace se gli racconti queste cose!”. (My translation:  It is not easy to entrust oneself to the mercy of God, because it is an incomprehensible abyss.  But we must do it!  "Oh, father, if you only knew my life, you would not talk to me like that!"  "Why?", "What have you done?" "Oh, I have done big things!" "Even better! Go to Jesus;  He loves when you tell Him these things!") 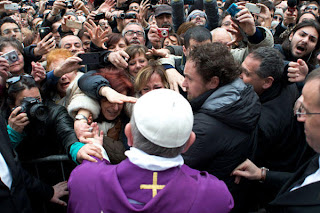 The first word is the Cross of Christ, but the second word is Mercy!

Chinese Translation of "Spirit of the Liturgy" Launched in Hong Kong

Chinese Translation of "Spirit of the Liturgy" Launched in Hong Kong 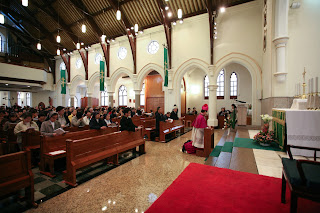 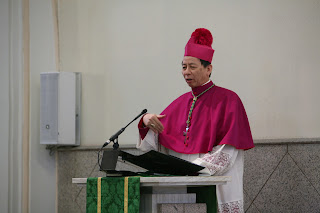 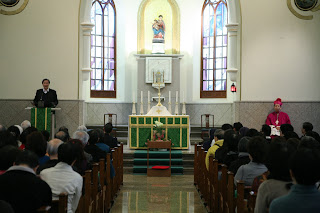 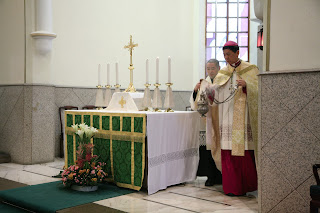 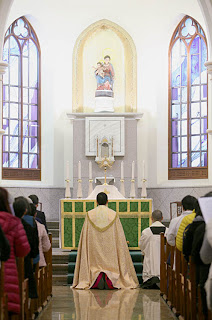 This was sent to me by e-mail and I thought it was an interesting thought experiment.

An economics professor at a local college made a statement that he had never failed a single student before, but had recently failed an entire class. That class had insisted that Obama's socialism worked and that no one would be poor and no one would be rich, a great equalizer.

The professor then said, "OK, we will have an experiment in this class on Obama's plan".. All grades will be averaged and everyone will receive the same grade so no one will fail and no one will receive an A.... (substituting grades for dollars - something closer to home and more readily understood by all).

As the tests proceeded, the scores never increased as bickering, blame and name-calling all resulted in hard feelings and no one would study for the benefit of anyone else.

To their great surprise, ALL FAILED and the professor told them that socialism would also ultimately fail because when the reward is great, the effort to succeed is great, but when government takes all the reward away, no one will try or want to succeed. Could not be any simpler than that. (Please pass this on) These are possibly the 5 best sentences you'll ever read and all applicable to this experiment:

1. You cannot legislate the poor into prosperity by legislating the wealthy out of prosperity.

2. What one person receives without working for, another person must work for without receiving.

3. The government cannot give to anybody anything that the government does not first take from somebody else.

4. You cannot multiply wealth by dividing it!

I can't wait to read the pastoral letter of Bishop Sample, who has been named as the new Archbishop of Portland, OR.

Here is the link:
http://www.dioceseofmarquette.org/UserFiles/Bishop/PastoralLetter-RejoiceInTheLordAlways.pdf

I've only skimmed through it, but from what I have read it looks great!

The sacred music of lent as given by the Church herself is incredibly moving and inspiring.  I am sometimes quite amazed that for 40 years we thought we needed to write new hymns and poetry to accomplish what was already given to us by Mother Church.  It wasn't even that the 'old' stuff was kept and the 'new' stuff was placed alongside it.  It was more of a tossing out of anything that was there and replacing it with modern substitutes.

The problem is that the Catholic faith was contained in a tried and true manner in the Sacred Music Mother Church gave us.  The new stuff was often trite, sentimental, shallow and often dismissive of the direction the ancient texts of the mass were directing our worship.  To recover a sense of the sacred and of more God-centered worship I think it is time for us to begin exploring the Sacred Music as given to us by the Church.

Linked above is one example of what I feel should have been done 50 years ago.  These propers are in the vernacular.  They use the texts of the liturgy as given by the Church.  They respect the modal character of Gregorian chant and have a penetential sound as appropriate to the season of lent.

I would love to hear these propers incorporated into a parish music program.

Can only Cardinals become Pope?

Many people have asked me if only Cardinals can be elected Pope.  I came across the following in my recent re-reading of the document regulating Papal Elections Universi Dominici Gregis:

83. With the same insistence shown by my Predecessors, I earnestly exhort the Cardinal electors not to allow themselves to be guided, in choosing the Pope, by friendship or aversion, or to be influenced by favour or personal relationships towards anyone, or to be constrained by the interference of persons in authority or by pressure groups, by the suggestions of the mass media, or by force, fear or the pursuit of popularity. Rather, having before their eyes solely the glory of God and the good of the Church, and having prayed for divine assistance, they shall give their vote to the person, even outside the College of Cardinals, who in their judgment is most suited to govern the universal Church in a fruitful and beneficial way.

However the one elected must be capable of being ordained as the bishop of Rome:

Can. 332 §1. The Roman Pontiff obtains full and supreme power in the Church by his acceptance of legitimate election together with episcopal consecration. Therefore, a person elected to the supreme pontificate who is marked with episcopal character obtains this power from the moment of acceptance. If the person elected lacks episcopal character, however, he is to be ordained a bishop immediately.
Posted by Praedica Verbum at 11:21 PM 1 comment:

Praedica Verbum
Fr. David is a Catholic Priest of the Diocese of Knoxville, TN currently assigned to All Saints Parish as an Associate Pastor. He is also the Vice-Chancellor for the Diocese as well as the Vocations Promoter. The title of the blog, "Praedica Verbum" comes from the Sacred Scriptures where in 2 Tim 4:2 you find written - "praedica verbum, insta oppurtune, importune, argue, increpa, obsecra in omni longanimitate et doctrina." I'll let you try your hand at translating the mother tongue of the Latin Church or, better yet, open the scriptures in order to translate.

What is Canon Law?

More to be added later